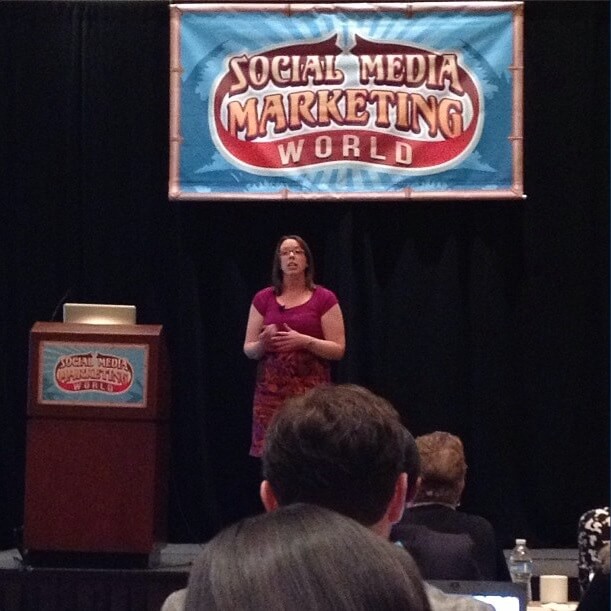 Propel’s own illustrious Social Media Manager was on the scene this week at the Social Media Marketing World conference in San Diego. Here’s what she had to say about what was said and seen this year!

Social Media Managers from all over the world descended on The San Diego Marriott Marquis & Marina this week for Social Media Marketing World 2013, put on by Social Media Examiner. The two-day conference was jam packed with keynote speakers and over fifty breakout sessions from some of the most renowned thought leaders in social media, including Mari Smith, Guy Kawasaki, Chris Brogan, Jay Baer, Sally Hogshead, and more. Sessions were also led by social media marketers from well-known companies like HubSpot, Sony Electronics, Cisco, Whole Foods, Intel, Dell, Petco, Four Seasons, and many others. In addition to providing tons of great information, there were social networking opportunities galore.

The opening night party was held at the San Diego Natural History Museum. In addition to connecting on Twitter and Instagram with the event hashtag #SMMW13, guests were given networking bingo cards. Tasked with finding people who “own Facebook stock,” “manage more than 3 social media clients,” “have more than 10,000 Twitter followers,” etc., the goal was to fill your bingo card with Twitter handles. While Propel didn’t win any prizes, we had a lot of fun meeting new people!

Monday and Tuesday’s sessions were filled with great content. Most were so popular that they ended up being standing room only with people using their ipads and iphones to take notes, photos and Tweets. Though we couldn’t attend them all, we definitely noticed some topic trends…

Podcasting – This was hands-down the hottest topic at Social Media Marketing World 2013. As content marketing becomes more and more saturated, marketers are seeking alternative ways to build and maintain thriving communities. Podcasting is a great way to connect with your audience and also generate revenue. One podcaster told us that he is now generating upwards of $25k per month just from podcasts. Much more than just sitting behind a microphone, podcasting must be done consistently and needs a clear strategy behind it.

YouTube – Like podcasting, YouTube offers companies a way to stand out from the crowd in the content marketing world. It is now more important than ever to hire a video production person for your company. Visual and video content is key to success on social media. Speaker Rebecca Corliss of HubSpot says that her company put together simple videos about how people at HubSpot create content. Videos don’t have to be long or sales-y. Offer fans a glimpse of your company’s culture and keep it lighthearted.

Pinterest – Last year Pinterest was the new kid on the block in social, but in 2013 Pinterest will be an important part of your content marketing strategy. If you are generating ebooks and capturing leads with forms/landing pages, you should be promoting them on Pinterest. People are used to clicking images on Pinterest with the expectation of being taken to a landing page.  Because of this, Pinterest has a 17% visit to lead conversion rate!

Some other highly buzzed about topics were LinkedIn Ads and building large LinkedIn Groups, the importance of Google+ for business, and blogging.  In 2013, you need to “be everywhere”, no one channel is perfect. Start thinking of your business as a media company and a content generating machine. Don’t sell to your audience on social media. Provide content that is valuable, and your audience will become your customers.

For more information on how Propel can help you with your social media marketing, check out PropelSOCIAL!