With so many users and channels, social media can be quite confusing, and features often go under-utilized. One such feature is tagging, a function that small businesses can use to increase engagement on social media platforms like Facebook and Twitter.

Tagging enables you to link a picture, post, or status to another user or business. Tagging not only alerts users that they have been tagged in something relevant but it also increases the reach of the post or tweet. Here’s some information on what tagging does and how to do it.

Facebook is a great tool to use for business if you know how to use it. In order to get the attention of a person or a brand, Facebook uses the ‘@’ sign. Let’s say you want to mention a brand in a post – a shoe store might mention they just got the newest shoes in.

If you type “We’re excited; we just unboxed the new @Nike running shoes in and they look great!” and post it to your business’s page, several things happen: 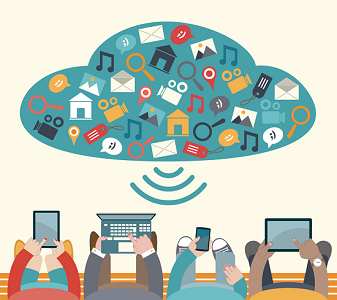 Use good social media etiquette. It’s best to not spam the same brand gratuitously, but good social media teams appreciate a mention and will be happy to throw you some free publicity in exchange for good content.

Tagging on Facebook can help you get more likes on Facebook posts. Tagging someone or another business on Facebook makes your post with the tag show up on your Newsfeed as well as the Newsfeeds of the tagged users.  Tagging also increases the likelihood that that person or business will share the update, which means that more people will see the post. Keep in mind that if you’re on your personal Facebook account you can tag both other users and businesses. However, if you’re running a business page for your Facebook you can only tag other businesses in your post.

When you’re running your business’s Facebook page, even though you can’t tag individual users, encourage users to tag themselves and their friends in your posts. If you want to take things a step further, ask your Facebook fans to share your content to their personal accounts, too! This will effortlessly expand the reach of your posts to an untapped audience and increase your business’s visibility.

Insider Tip – when you go to tag a brand’s Facebook page, it’s helpful to first do two things: 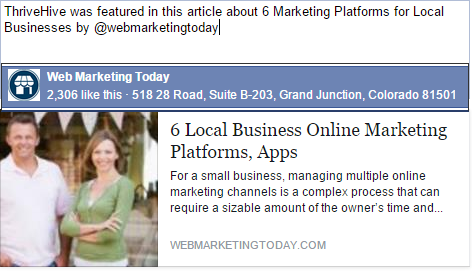 Twitter has its own language of hashtags and symbols and it’s not always easy to tell who, if anybody, is reading your tweets. Tagging on Twitter is how you respond or start a conversation with another Twitter user.

Tweets that you post without an @ or # will be only be seen by your Followers. People who are not following you might see them if they visit your Twitter Page – in the case of ThriveHive, our page is https://twitter.com/ThriveHive. What this means in business terms is just passively tweeting out to the world in a monologue is very passive, not visible to many people, and not the most effective way to gain followers and broaden your audience.

The simplest way to get more followers and increase social media engagement is by talking to other Twitter users and brands. Below every tweet is a little arrow pointing left – click this to Reply. Twitter will automatically start your new tweet with “@” then the other person’s username. Not only will you start a conversation, but Twitter will keep that conversation in order so anyone can follow the thread of the discussion.

Alternately, if you are not replying to a specific message, but just want to get someone’s attention, you can manually message them by just starting your tweet with ‘@theirusername.’ For example, to say hello to ThriveHive on Twitter, create a new Tweet and type ‘@ThriveHive Howdy!’

What’s great about a conversation? Not only will your tweet pop up on that user’s dashboard, it will appear in the timeline of anyone who follows both you and the account you’re messaging. That reply will also show up on your conversation partner’s Twitter page for anyone to see. Your tweets and business are now more visible than you were just posting to your own timeline.

You’ve started a conversation – great! But who can see it? With a normal @ reply, just you, the person you messaged, and people who follow both of you. Even your own followers won’t see it in their timeline unless they also follow your conversation partner. How do we fix that?

This is where the funny little dot comes in. You may have seen tweets with a dot before the ‘@’ sign in a tweet. If you were to send us ‘.@ThriveHive Howdy!’ all of your followers would see it in their timeline, not just those who also follow ThriveHive.

The ‘.@’ is a great thing to use if your message is something that would be of broader interest to your followers. For example, let’s say you run a restaurant and you want to send a message to another local business to tell them you’ll be at an upcoming food festival. That’s public news of interest to all your followers, put a ‘.@’ in front so everyone can see it!

That doesn’t mean you should use a .@ reply every time, though. If you just want to have a conversation with another account – say you’re just checking in or asking them a question – just use the normal @ reply. Your typical follower might not be interested.

Now you have a grounding in how and why to tag others and start conversations on Facebook and Twitter. There’s a lot more to this topic which we’ll cover in future installments, but this is enough to get you going. Now get out there and start some conversations!