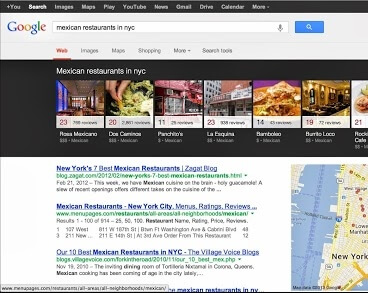 “It goes backwards, forwards. It takes us to a place where we ache to go again. It’s not called the Wheel. It’s called a Carousel.” – Don Draper, Mad Men

Google’s introduction of a new carousel feature to its search engine results page may not “let us travel the way a child travels,” as the dapper Draper put it, but it does further raise the stakes when it comes to businesses jockeying for the ever-important top position on the search engine giant.

The carousel feature, officially launched today, is a scrollable horizontal bar at the top of the Google search page displaying image representations of search results. It currently only works for restaurant, bar, and hotel searches.

Google “Abington restaurants,” for example, and no longer do you just get a vertical listing of plain search results, but now an eye-catching row of pictures (or map locations) of Abington-area restaurants. Consumers can adjust the search results by zooming in or out on an adjacent map.

The official Google announcement did not say whether a restaurant, bar or hotel’s positioning on the carousel is impacted by official Zagat reviews. However, at least one travel technology news site said Zagat reviews will impact carousel positioning on some level. (For what it’s worth, the Abington restaurant listed first on the carousel does not appear to have a Zagat rating, but the next five do.)

What’s important for local business owners is that the carousel allows more businesses to appear “above the scroll,” as well as allows consumers to more easily flip/scroll/thumb through the results. It also gives more impetus for businesses to make sure they have a search engine-friendly website, have thorough Google+ pages complete with attractive photos, and monitor customer reviews.

Keep an eye on this new feature in the coming weeks and months to learn more about how the carousel affects search results, customers, and local businesses!