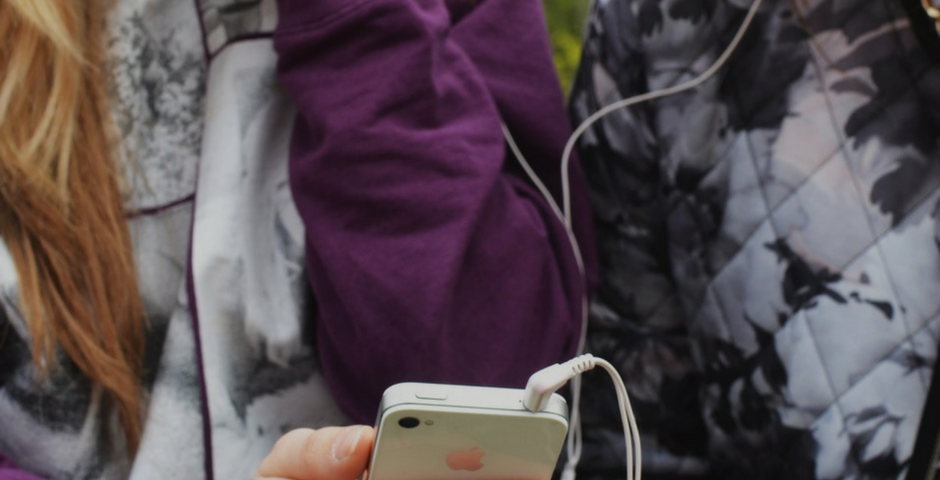 As a small business owner, you are always looking for the next unique idea or trend to send you over the edge and stand out from your competitors. You want to be the business on everyone’s mind and the topic of conversation in your industry. You’ve heard about small businesses going viral, but how did they do it? In this post, we’ll uncover 5 small businesses that were able to go viral and the actions that took to propel their business to success.

Get Your Business to Go Viral

Going viral. Everyone says it, but do you know how to achieve getting your small business to go viral? These 5 businesses were able to figure out a way to to go viral with the help of social media or by identifying an untapped niche in their industry. Here are 5 examples of business that went viral and an analysis of the marketing tactics they used to achieve success. 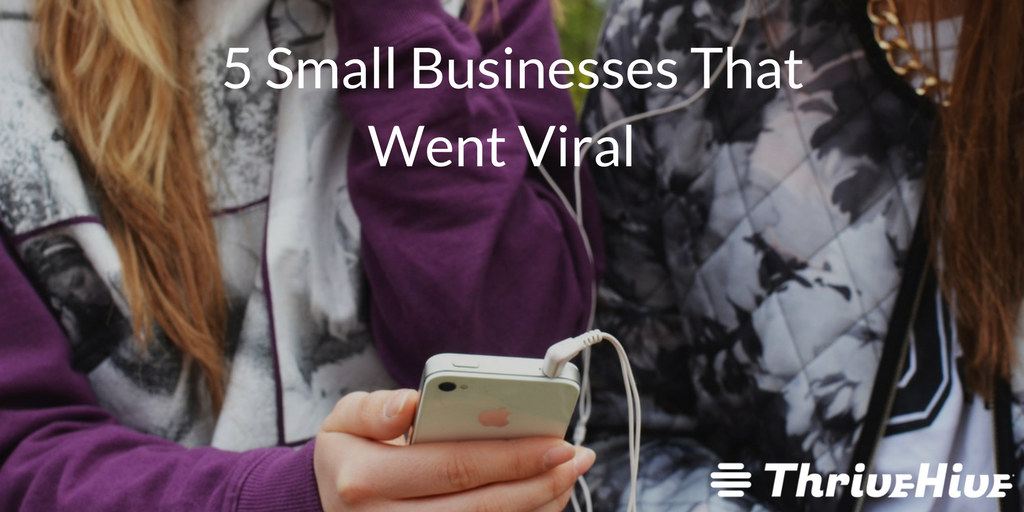 Jenness Farm is a farm located in New Hampshire that makes natural goat soap and other goat milk products.

To make their small business go viral, Jenness Farm expanded their offering to include goat yoga. Did we just say goat yoga?! Yup. The farm offers goat yoga classes throughout the week and weekend and classes are consistently sold out.

Jenness Farm took a look at trending topics and found that people were actually already combining goats and yoga. Since the farm’s main product is goat milk soap, they already had available goats—all they had to do was add yoga.

The combination of yoga and goats made for a fun, healthy, and unique service that they could offer. Goat yoga brought people to both their website and their Facebook page, to see the yoga classes in action and to sign up. 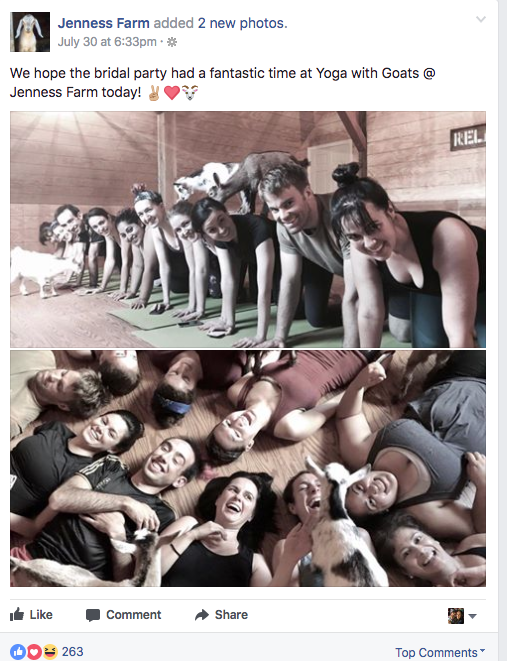 The wellness industry is currently booming, and yoga studios throughout the world are pairing yoga with traditionally unconventional activities including beer, chicken nuggets, and even goats. Jenness Farm jumped on this untapped market. When they shared pictures of the classes on their Facebook page and website, they let people see just how fun and cute this class was. Now, the classes are booked for months in advance and Jenness Farm has gone viral, especially in New England.

Dominique Ansel Bakery is owned and operated by Dominique Ansel and has three locations: in New York City, London, and Tokyo. Dominique Ansel, chef and creator of the cronut, made this unique pastry which is a cross between a donut and a croissant. 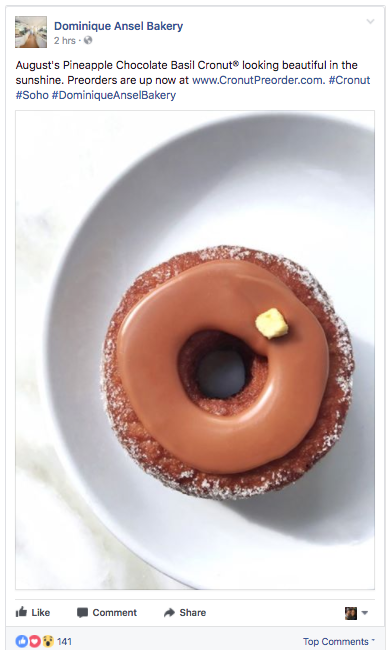 The cronut is unique because it can only be made and sold by Dominique Ansel Bakery, since Ansel trademarked the item. This requires people to come to one of the three locations to try the tasty treat.

Another technique Dominique Ansel Bakery used was to give bloggers a sneak peek at the cronut so that they could write posts about the new creation. This allowed the public to find out where they could try one of these cronuts and figure out if it was worth trying. Having bloggers and the public paid off for the bakery. By the third day of selling the cronuts, there was a line of 100 people waiting to taste the combination of a donut and croissant.

With the heavy presence of foodies on social media, there is a benefit to be had from creating food that’s visually appealing or “Instagram-worthy”. Dominique Ansel was able to tap into this market on Instagram. This pastry was interesting and unique, making it perfect material for social media users to share (foodies or not), which is why it went viral.

Blendtec: Will It Blend

Blendtec is an online business that, as the name suggests, sells blenders. Their blenders can be found on online sites such as Amazon or in stores like Best Buy or Target. This company prides itself on how well their blenders can blend.

Blendtec is in the crowded industry of kitchen supplies. To stand out from their competitors and get people talking about their name, they created a video series titled “Will It Blend?” This series shows that this blender can blend anything from fruits to iPhones. These videos are funny and entertaining, but also show that Blendtec’s product actually works well.

Blendtec took advantage of the popularity of silly internet videos to gain not only widespread visibility, but also long term. This viral video marketing campaign has continued on for 11 years.

Why do people watch reality television or videos of skateboarding snafus online? It’s because people love to watch other people doing silly or new things. Blendtec capitalized on this human interest and blended their brand with the shock value of pureeing an iPhone in a blender.

Embark is a small business that tests dog DNA. This test costs about $200, and it provides owners with the breakdown of their dog’s pedigree and breed-specific information like health and behavioral traits.

Embark was able to tap into the love that owners have for their dogs as well as the curiosity around DNA testing. Embark also recognized there was a growing number of people adopting rescue dogs, whose background or breed was difficult to identify.

Embark’s viral marketing technique was simply to hit the dog industry at the right time and to produce a service that filled a specific dog owner niche.

They also made the test kit very easy for dog owners to submit to Embark, via a simple swab. Their site then provides an extremely user-friendly view of the results as well as recommendations for the health and traits of the dog. The last marketing technique Embark used was to partner with Cornell University College of Veterinary Medicine, aiding in their credibility.

Embark didn’t just appeal to rescue dog adopters, but also to dog breed aficionados. These types of dog owners are less likely to adopt a rescue dog since their pedigree and breed are often unknown or difficult to identify. However, with Embark, they can get the best of both worlds: the joy of rescuing a dog and the satisfaction of identifying their dog’s breed.

People will do anything for their dogs. Dog adoptions are currently trendy with the slogan “Adopt Don’t Shop”. So with this rescue movement being huge, Embark has plenty of mutt owners wanting to spend the money to find out what type of breed their dog is.

Rhino Foods is a cookie dough and brownie dough company formed in 1981 and located in Burlington, Vermont.

Rhino Foods has taken over the ice cream industry with the creation of ready-to-eat cookie dough for commercial use in ice cream. The cookie dough they make is safe to eat in large amounts and meets health safety codes.

Think back to when you were a kid. Did you not eat (or try to eat) the raw cookie dough when your parents were making cookies. You did and Rhino Foods knows it. Rhino Foods tapped into people’s love for raw cookie dough and ice creams. The best part about this product is you don’t even have to cook it. So who wouldn’t love this cookie dough?! Rhino Foods proved their success when they were named in Forbes 2017 top 25 small business list.

Devon is the Marketing and Events Specialist at ThriveHive, where she travels around the country hosting Google digital seminar events for ThriveHive and GateHouse. When she's not traveling you can find her around Boston, probably petting a dog.